skip to main | skip to sidebar

Indoor Pool Workouts in one of the Y’s two 25-yard pools begin at 5:30 a.m. weekdays and 7:00 a.m. weekends and last one to two hours. These workouts are open to all Full Y members.

Open-Water Swims are held from May to November at West Neck Beach and other local Long Island beaches. Outdoor swim schedules are posted on The Water-Blog.

Want to swim for the Home Team? You can! Join HUMS at clubassistant.com. 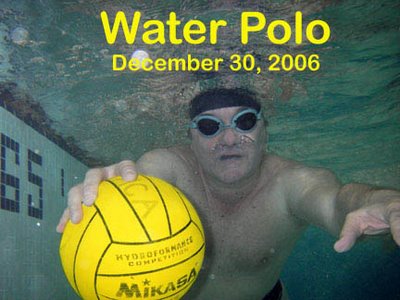 Bob's pretty sure that this isn't legal but it does make for an unusual opening picture. 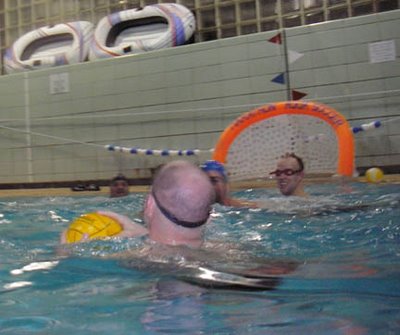 Ok, ok. Let's play this game according to the rules and I'm pretty sure that means NO Flippers! 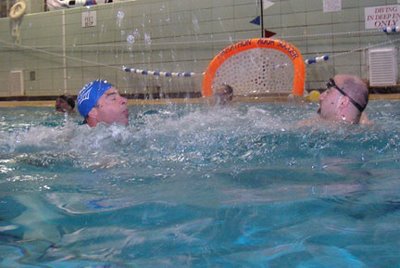 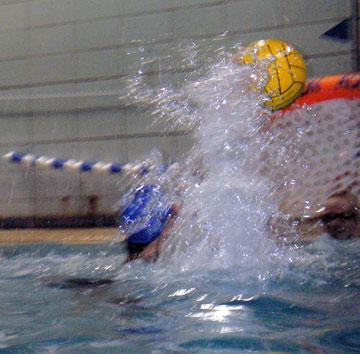 Ooops, there it goes. Looks like somebody was hiding it underwater!
Posted by Mike Engel at 3:50 PM No comments: 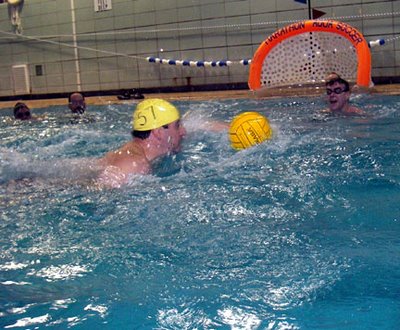 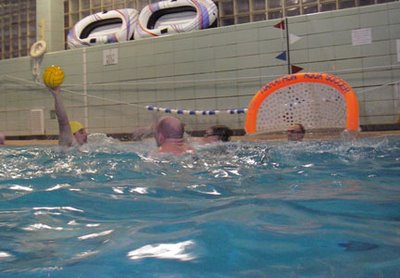 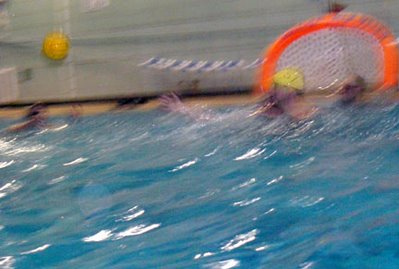 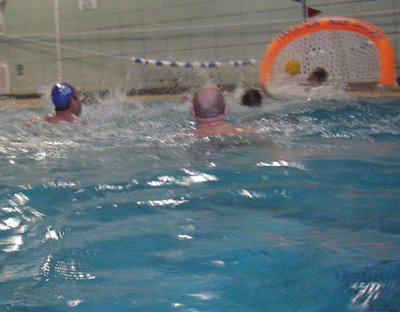 Water Polo is almost done... are you ready for a workout? 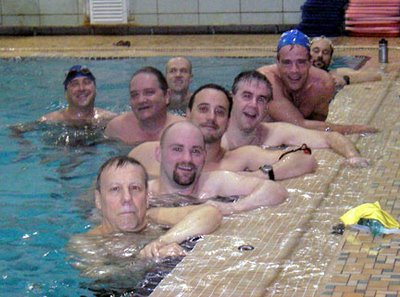 I'll say it's done! Everybody's looking for a spot on the wall to hang on to. 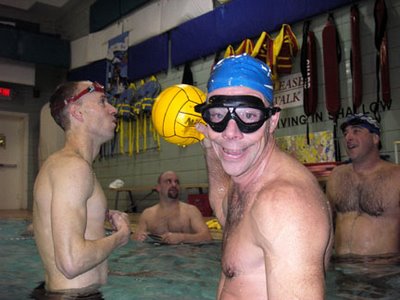 This would have been a heck-of-a-lot easier if we played in the shallow end. 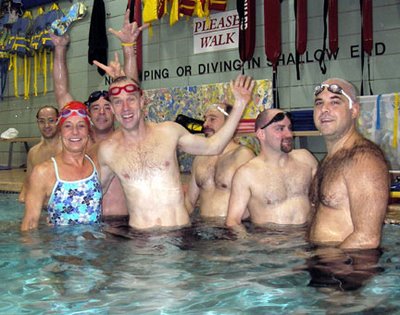 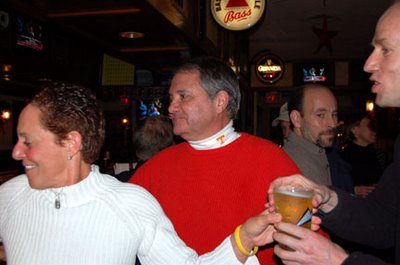 Pass out those beers -- it's Friday night on a 3-day New Year's weekend and we're ready to start partying! Who cares if our annual Water Polo Game is just 12 hours away? 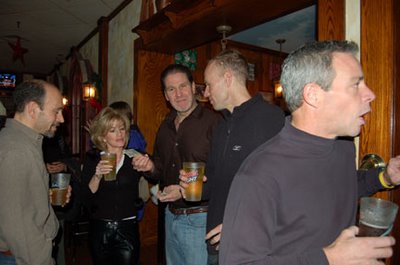 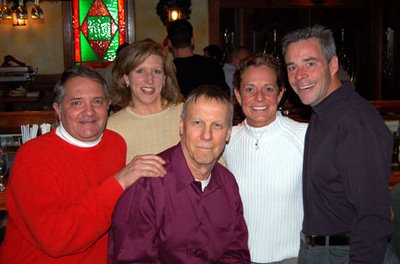 OK, no beers here -- but we are supposed to be athletes, (some more than others!) 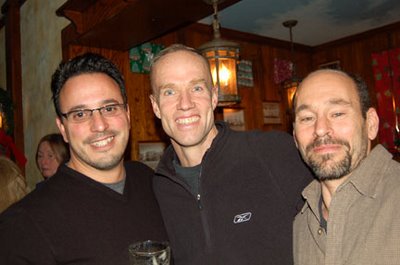 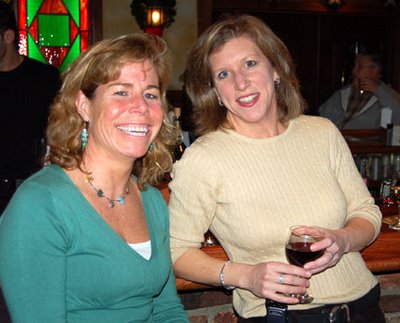 Lynn and Eileen come up with a pair of winning smiles! 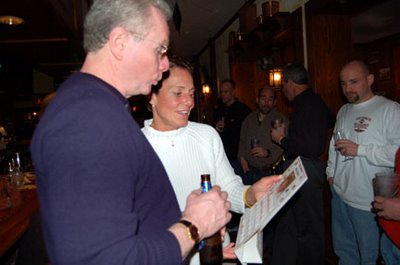 Chris is quite impressed at how many quarters Nancy has collected for another worthy cause. 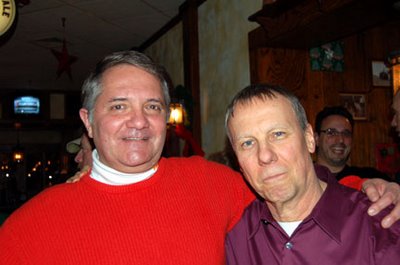 Neither Bob nor Mike can remember exactly how long they've been swimming together at the "Y" but they're pretty sure it started some time in the early 1980's. It's for sure that there is no one around to challenge that estimation! 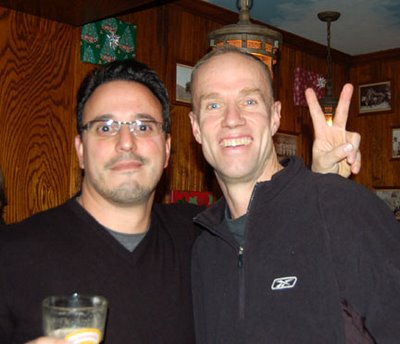 It's only about 12 hours till the Annual Water Polo contest, (scheduled for 6AM Saturday Morning), and already Sal is trying to get the best of Paul. Little does Sal know that Paul plans on being out and running by 4:30AM BEFORE he starts Water Polo!

The 22nd Annual, (where did Bob come up with that number?), Huntington Masters Swim Team Holiday Brunch was held at the Black Forest Brew Haus in Farmingdale on Sunday, December 10th 2006. Great fun and a GREAT turnout!

Thanks to all who made the trek to Farmingdale on such a miserable day weatherwise -- just kidding, it was in the fifties and not a cloud in the sky, feeling more like late September than December -- and the warmth showed through as you can tell from the happy group pictured above (or was it the endless Bloody Mary's?).

To those of you who were not able to attend this year, we hope to see you at next year's party (if not before!). Special thanks to Bob Miller for setting up this year's Christmas Party.

Posted by Mike Engel at 6:35 PM No comments:

For the second year in a row, our own Rob Martell braved a blustery cold December wind for an Open Water Swim at West Neck Beach. 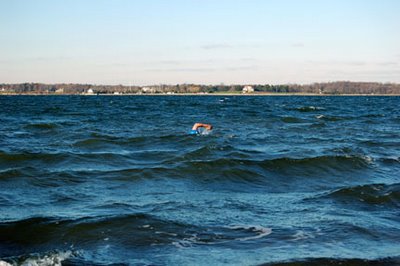 Although Winter is still officially a bit more than two weeks away, the wind-wipped chop of Cold Spring Harbor and the dark water told the real tale -- this is not an average Open Water Swim, this is man against the elements. And this December 2nd, the "elements" were VERY chilly! 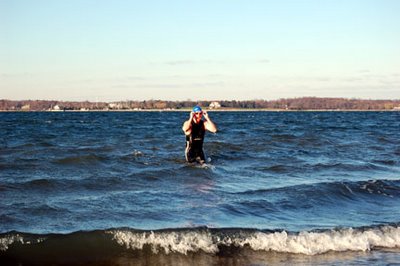 Rob was VERY happy to get out of the water and on his way to an already heating auto! The time was around 8:35am on this December 2nd Saturday morning and, without a cloud in the sky, the outside temperature hovered around 43 degrees. Don't even ask about the wind chill! 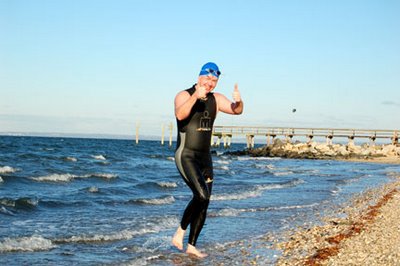 Chris and Tim were there to cheer Rob on. And if you want to ask about the wind chill, talk to Tim or take a look at the picture below. One picture IS worth a 1,000 words! 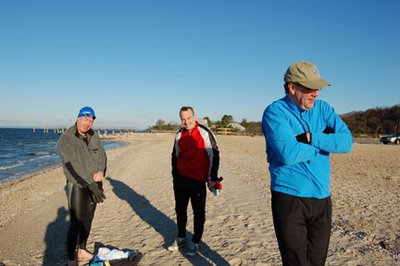 Posted by Mike Engel at 6:26 PM No comments:

Black (or any dark color you choose) "Shark" T-Shirt Now Available for sale on Zazzle -- just "click" the picture and take a closer look!

I'd Rather Be Swimming Mug

Yes... that's us swimming at West Neck Beach! So kick back, relax with a nice hot cup of tea or coffee and dream about some open water swimming. This unique HUMS Mug is now available at Zazzle -- just "click" the picture and take a closer look! 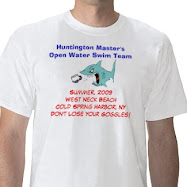